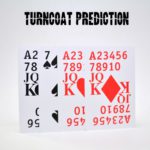 The performer displays an envelope, which he states has four large (Jumbo) Cards. One of these cards will match any card selected by a spectator. A spectator is asked to name any card. The performer removes the four cards from the envelope back out, then slowly turns them to face audience, to show their selected card is indeed one of the four. The audience is amused, because each of the four cards displays the Ace to King of one of the four suits, covering all the 52 cards on the four large cards.
He now states that he will make the complete image of a selected card fly from a deck to the packet of four cards. A spectator selects a card from a deck. We will presume this is the 7 of Spades. The card is replaced in the deck, and the deck riffled towards the packet.
The Four Jumbo Cards are again fanned, and it is now found that the Jumbo Card with the Ace to King of Spades has turned back up in the packet. When this card is turned over to face the audience, it has magically changed to a large 7 of Spades.
As card effects go, this one in offbeat, and entertaining. We supply you all the special cards (the selected card does not have to be 7S – we give you other alternatives), complete with instructions. Just follow the moves, and the trick works itself. Very good value for the price.

Be the first to review “Turncoat Prediction” Cancel reply 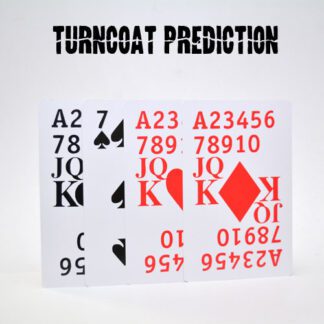