A shred of evidence by David Mitchell 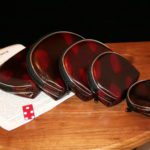 Shred of Evidence by David Mitchell
(c. 2007) (Submit Review) (Submit Update)
Effect: This is a wonderful effect with lots of comedy, suspense, audience participation, and fantastic magic! A volunteer is selected from the audience and a bill is borrowed from him. It is promised to be returned but not before he is given the opportunity to win a one hundred dollar bill by using his bill in a fun game of chance. The performer requests the loan of a 10 dollar bill from the volunteer. The volunteer is asked to sign his bill to mark it for future identification. The performer now displays six envelopes (the type used as security envelopes with a busy design printed on the inside) and also five bills obviously of the child’s play money variety. He states that he will place a fake bill in five envelopes and the volunteer’s bill in one of the envelopes.

After doing this, the envelopes are sealed and then thoroughly mixed by the performer. Now the bills are numbered on the outside 1-6 with a marker. Another spectator with a watch with a second hand or digital style is asked to come and hold the six envelopes. The performer explains that the volunteer will have 90 seconds order to eliminate the envelopes down to one and if he finds a fake bill (any one of the five) inside his last envelope he will get to keep the one hundred dollar bill. If he finds his own bill in the last envelope he will get to keep it. Nothing to loose and a five to one chance to win the one hundred dollars. The performer now produces a die and tells the volunteer that each time he rolls the die the number on top will designate the elimination of that numbered envelope until he has eliminated all of the envelopes but one and that will be his selected one.

The helper is asked to time the volunteer and give him ninety seconds to play the game. The hundred dollar bill is placed inside a zippered pouch with about half of it remaining in view and this is placed in full view of the audience. The signal is given and the volunteer begins to roll the die. The first envelope is taken away by the performer but to everyone’s surprise, the performer produces a small paper shredder and it is turned on and the eliminated envelope is openly shredded right before their eyes. A look of fear and shock comes over the volunteer’s face as the audience roars with laughter. He rolls the die again and again that envelope is taken and shredded … more laughter and further anxiety from the volunteer. The die continues to roll as a mound of shredded paper piles high in front of the shredder.

Finally only one envelope remains. The envelope is taken by the performer and it is fairly opened and the volunteer is asked to remove the contents. To everyone’s surprise, it is not a play bill or a bill from the volunteer but a small sealed envelope. Which leads to finding the spectators signed bill inside a nest of five purses!

You're viewing: A shred of evidence by David Mitchell $100.00
Add to cart