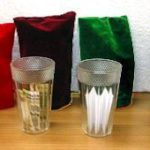 The original effect “Everybody Wins” was marketed by the Supreme Magic Co. and has been described by its owner Edwin Hooper on page 76 of his book Edwin’s Magic Vol 2. It has all the ingredients of the best of Magic effects, – it is extremely simple and fool proof to perform, very effective for any audience with the appropriate presentation, and highly versatile, allowing the performer to use it for almost any type of show, from Children’s Birthday Party Shows, to Comedy effects, or Mental effects. As Edwin says, “I had great fun in working out this little effect. I believe it is the most commercial ‘Just Chance’ trick that I ever sold as a dealer.” We re-introduced this effect a couple of years ago, and it has proved extremely popular, as effective today, as when marketed by Supreme, many decades ago.
In the original effect three tumblers covered by three different colored bags are displayed. Two spectators select two of the tumblers freely (absolutely no force, and they can change their minds as often as they wish), leaving you with the third. They get empty tumblers – you get one filled with currency bills or the Jackpot.
We have enhanced this further, by adding another colored bag (giving you a wider choice of one in four, with more participants, though you can always use three for a shorter presentation), but more importantly, a double load feature, which enables you to have something appropriate appear in each tumbler, and still retain the flavour of the original effect.
So with these bags, three spectators would get consolation messages in their tumblers, (instead of empty tumblers), while you got the “jackpot” bill. Or if you are feeling generous, three participants could get a dollar (or Rupee, Pound, or whatever currency you use) bill, while you got a hundred dollar bill. If you don’t want to give away money, you could announce that 3 of the tumblers had dollar bills, while one had a hundred dollar bill. Now ask 3 spectators to participate in a game of chance, with a fee of a dollar each. They are sure to get their money back, but stand a chance of winning the hundred. They get to pick 3 glasses first, which contain a dollar. You are left with the last glass, which has the hundred.
And you could also perform any of the effects possible with the original model, though you will prefer the advantages of this one, with the alternate “consolation” load. A load in every glass suggests there could be no “manipulation” of the contents.
We supply you the four special gimmicked velvet bags, responsible for the effect, with complete instructions. In addition you will require four clear glass or plastic tumblers (almost any tumbler will do), and the bills, consolation messages, or whatever you wish to use this with.

Be the first to review “Everyone wins plus” Cancel reply