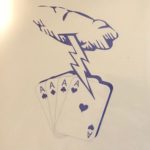 A card is selected, signed, and lost back into the deck. Taking only the 4 Aces (deck discarded), you perform the cleanest of the “Twisting the Aces” routines – with the Aces reversing one by one with no false counts.

The black Aces are now placed into the card case – there is no doubt at all that they do go into the case – leaving the red Aces, “These will now magically produce your signed card.” The spectator holds the red Aces but nothing happens. Or does it. On turning his two cards over he finds he is now holding the black Aces!

Finally, you tip out the cards from the card case revealing the two red Aces – but they have one card caught between them….the signed selection!

Be the first to review “Thunderstruck Packet” Cancel reply